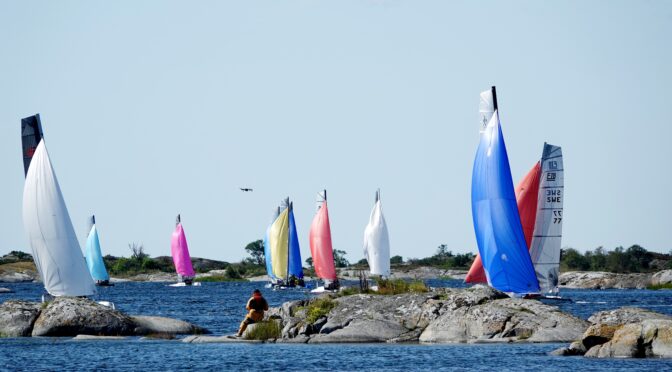 Two weeks remain until the start of the Stockholm Archipelago Raid (SAR) which is also the F18 Raid World Championship this year. As the start gets closer the 30 teams from 11 countries go through and update their navigations equipment, safety devices and personal gear. Meanwhile, the Race Organisations review the Checkpoints and Sailing Instructions, set the menues together with the restaurateurs of the remote islands at the base camps and prepare all volunteers and the film and media team that will follow the sailors around the course.

The level of competition is very high, it has never been as tough to get on the podium. All SAR winners since 2016 are represented and the best F18 long distance sailors on the planet will participate. It will also be a battle between F18 boat manufacturer since all major brands are present: the Goodall Akurra, Goodall C2, Windrush Edge, Exploder Scorpion, Cirrus R and Nacra Evolution.

Some of the most renowned teams that have a good chance at going home with another F18 medal:

It has never been easier to follow the race in real time. The boats will have trackers that send the positions, speed and course continuously. A team of film and still photographers, commentators and media experts will provide updates several times per day in social media and YouTube. Follow and share the Stockholm Archipelago Raid channels on Facebook and Instagram and the Official Notice Board for updates, results and more information.

After 5 long days of sailing from early morning to late afternoon the teams will finish in the heart of Stockholm, just outside Junibacken at the Royal park Djurgården, sometime after 15.00 on Sunday the 21st. The boats will then be pulled up, demasted and loaded onto trailers just next to Junibacken. Friends and family are welcome to greet the winners, talk to the sailors and get a close look at the spectacular boats on land. Food and drinks will be available at the pricegiving cermony that follow as soon as a final result is established.

Stockholm Archipelago Raid – A race through 36 000 rocks and islands

Stockholm Archipelago Raid (SAR) is a yearly recurring event. This year it is also the F18 Raid World Championship. The raid is a mix of sport, nature and adventure in the perfect F18-playground; the stunning Stockholm Archipelago. It is the largest archipelago in Europe with 36.000 rocks, skerries and islands and the most difficult one to navigate in. It offers limitless possibilities for exceptional courses between the check points on islands, buoys, light houses and beaches. Many famous sailors from all over the world have competed in the raids over the years. For a full list of winners of the Archipelago Raid / Raid Revenge and Stockholm Archipelago Raid, see the F18 hall of fame.