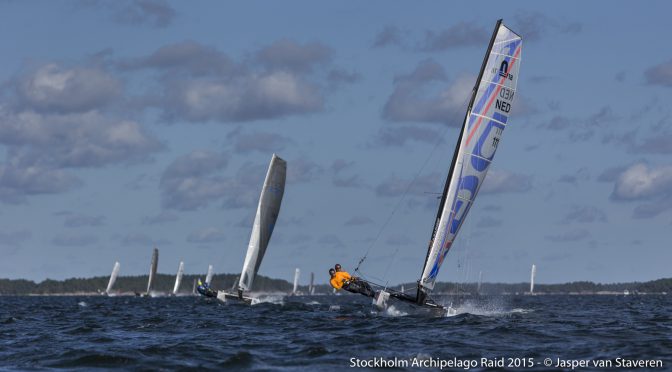 There has been 19 raids in the Stockholm Archipelago since Franck Cammas and Steve Ravussin won the first extreme sailing adventure for F18 catamarans in 2001, organised by Atlant Ocean Racing. The race was over 5-6 days, often from 4 in the morning to late in the evening or even around the clock. Paddling was allowed which meant no rest in lighter winds. Truly extreme.

Since 2010 the Swedish F18 association is responsible for the raid that has become a less extreme version without paddling, more time for sauna, dinner and a good nights sleep. It has evolved into a 4 day sailing adventure and since 5 years the number of teams have steadily increased and in 2019 the raid was fully booked with top teams from 13 countries. See the F18 Hall of Fame for all winners.

The 20th raid will be something extra. For the first time since 2009, and maybe only time, the raid will be a 5 day event, from the 19th to the 23rd of August 2020. The course will be longer with two alternatives depending on the weather conditions. In both cases the start will be in Saltsjöbaden and the first base camp will be in the very north of the archipelago. If the winds are moderate the goal will be the archipelago of Åland in Finland with another 25 000 islands. It includes a crossing of Ålands Sea of about 25 Nm. If the winds are too strong the course will instead turn south, possibly all the way to Nynäshamn. In either case the fourth base camp will be Sandhamn before the final day back to Saltsjöbaden.

The adventure just got bigger, 5 days instead of 4, but the winning concept stays the same as the last couple of years. Lots of fantastic F18 sailing in the stunning archipelago, sauna, good food and drinks and sleep in a bed or under a roof. Repeat times four.

Sign up for the newsletter to stay tuned about information about the race and how to secure your place in the 2020 edition.