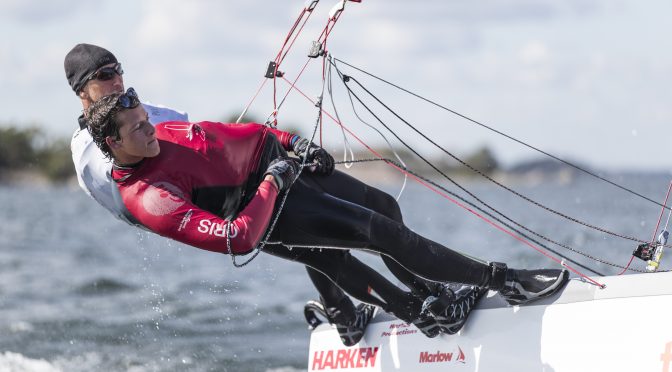 It is a challenge to organize the Stockholm Archipelago Raid not knowing how many teams will come in the end due to the pandemic and different countries travel restrictions changing back and forth. Out of 36 teams that signed up originally, 19 teams seem to make it to the starting line. They are from Sweden, Germany, The Netherlands and Belgium. The level of competition is, as always, very high with many top teams and several winners from previous years. There are also several rookie teams doing the raid for the first time and a two teams doing a come back for the first time since the old “Archipealgo Raid”.
Confirmed teams 2020/08/12 (subject to national travel restrictions):

Course and Base Camps
The start and goal will be in Saltsjöbaden and the base camps will be on the beautiful Islands of Rånö in the south (one night) and on Lökholmen (Sandhamn) in the middle of the archipelago (two nights). It gives the opportunity to round iconic places like Huvudskär before going north towards Sandhamn on day 2. On day 3 the fleet might reach Rödlöga In the north passing magic islands of the outer archipelago on the way. The aim will be to start early (6 AM) at least one day to be able to reach remote places far from the base camps. Possible course 2020 (for illustration).

Coming prepared with the right equipment can often be the difference between making it to the finish line or not. In terms of navigation sailors need to be acquainted with their GPS and be confident that it works in the very wet and difficult conditions of an F18 raid. Mandatory and recommended equipment is listed in the Notice of Race.

Some useful tips to the sailors:
• Bring food for lunch breaks for all 4 days (not catered for) + energy bars or similar to be able to eat while sailing.
• Put your VHF in a cover and have it on the boom.
• Make sure your mobile phone cover is water tight. Make sure that the mobile battery lasts the whole race.
• Bring camel backs with some sport drink and take small sips all the time.
• Make sure you have tested your GPS device and know it works in wet conditions with wet fingers and over extended period of times. Bring an old GPS as a spare in case it breaks.

While the virus is spreading quite uncontrolled in the US, Brazil and other places around the world the EU has managed to contain the pandemic quite well. However, a resurgence in new cases has sparked concern in Spain, Austria, the Netherlands, and France among other.
In Sweden cases has continued to decrease steadily since the peak in mid- April when we had over 100 deaths and 1250 new cases per day. Now there are less than 250 new cases daily despite massive testing and no or less than 5 new patients go to intensive care per day in Sweden.

However, the situation changes day by day and the pandemic can pick up speed again. The SAR organisation monitor the situation and will take the following measures to prevent the spreading of the virus during the raid.
• Maximum 50 persons are allowed, Race Committee and Media excluded.
• Breifings / gatherings will be limited and courses published online etc.
• Dinner and breakfast served in tents at Rånö and the large boat house Slipen at Lökholmen.
• Max 2 teams share a room (the same teams all days)
The participants
• If you get ill or show symptoms of Covid-19 you should withdraw from the race.
• Limit your contacts with people outside your family prior to the race.
• Make a travel plan for how to get to the race and back home safely.
• Spread out and keep some distance to other people during dinner / breakfast
• Avoid using showers or go at different times. The sea is always nearby.
• Sailors should complete the World Sailing Personal Location Form.

With these measures the Stockholm Archipelago Raid will be carried out in a safe and responsible way. Because once the sailors has left shore only the race, the stunning nature and the adventure will be on their mind for 4 long, lovely days. That’s what F18 is all about…