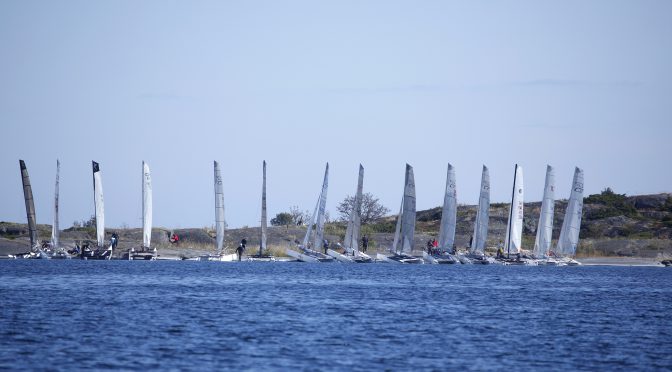 The raid is a mix of sport, nature and adventure in the perfect F18-playground; the stunning Stockholm Archipelago. It is the largest archipelago in Europe with 36.000 rocks, skerries and islands and the most difficult one for navigation. There are still islands and groups of islands where no sail race has ever passed due to their remote location and because part of the year they are bird or seal protection areas. It offers limitless possibilities for exceptional courses between the check points on islands, bouys, light houses or beaches.

Many known sailors from all over the world have competed in the different raids over the years. For a full list of winners of the Archipelago Raid / Raid Revenge and Stockholm Archipelago Raid, see the F18 hall of fame.

In previous years, since 2014, the raid has been made up of 2 legs per day (8 legs in all weather permitting) with a lunch break in between. After the finish the teams will have time for a beer and a sauna before a good dinner. The accommodation is simple in small cabins or youth hostel standard. After a good nights sleep breakfast is served and the teams get the course and checkpoints for the coming day.

The competitors are free to choose their route between two checkpoints. Each team gets a sea chart of the area and coordinates for the checkpoints. It is strongly recommended to have a GPS with plotter attached to wrist or on the chest. Sea charts are good for planning and finding the best way, but the scale is too large for close navigation.

Each day the fleet will sail between 50 and 100 NM depending on the winds. It will be tight, intensive racing in the daytime and good food and nice company in the evenings

Check out the Archipelago and other nice places at  http://www.stockholmarchipelago.se/en/

For many years sailors have been raiding the Stockholm and Swedish Archipelagos in search for check points, speed or just sheer thrill. Pia l’Obry was one of the pioneers in Sweden and she arranged a long distance raid around the Swedish coast with Hobie cats in 2000.

In 2001 Atlant Ocean Racing launched the Archipelago Raid, an extreme sailing orientering in the Swedish, Åland and Finnish archipelago with F18 as the platform. The first winners of this race was Franck Cammas (Fra) and Steve Ravussin (Switz). In the years to come hundreds of sailors from 16 countries participated in the race which became notorious for being very hard with almost no sleep and paddling when the wind was light. The last time the Archipelago Raid took place was in 2009.

In 2010 the Raid Revenge was created. It was a three day raid with good sailing in the outer Stockholm Archipelago with time for a good sauna, some beer good food and sleep in a bed in the base camp for two nights. It quickly became popular because of the friendly atmosphere and intense sailing. In 2015 the event was extended to 4 days and the name changed to Stockholm Archipelago Raid, but the concept stayed the same.