Having sailed most Archipelago Raids since 2004 I have many very strong and beatiful memories, but it becomes blurry what happened which year. I tend to attach the memories to something that stood out that specific raid. “The year the wind died and we had to paddle across the Åland sea (2005)”. “The year with a very windy first day when Darren and Jeroen sailed from Finnhamn to Fejan with an average speed of 17 knots (2015)”. Etc.

I will remember the raid 2021 as the downwind raid with more gennaker runs than ever before, four days in a row. All eight races started with our gennaker hoisted and it stayed up much of the time. This since the wind shifted 180 degrees after 2 days, just as we reached Fejan and started to head back towards Stockholm.

The forecast on the first day was awesome with 15-20 knots of wind from West to South west, a little more in the gusts. As we left Saltsjöbaden behind and approached the outer archipelago the winds had already increased to 20 knots+ and we where flying with the gennaker, hitting the 24 knots mark on the GPS. Navigation was difficult since all focus was on sailing fast without capsizing.

As we approached the Check point Gillöga, with many shallow areas, Demesmaeker / Gagliano (BEL) where in second place behind Karlsson / Nordblom (SWE) when they hit a underwater rock in high speed. Both daggers broke right off leaving the boat standing on the rock. They had to lift and push it off and borrowed a tool from a safety boat to cut off the splintered daggers. They managed to sail the remaining 15 Nm downwind to the finish line without daggers. Incredibly enough their Akkurra wasn’t damaged other than the broken daggers, so with two replacement daggers they where all set and ready to go in time for the start of leg two.

Erik and I where doing fine as we approached Sandhamn on a half wind reach until a gust buried the bow into the water with a capsize as a result. When we got to the finish we realised that most teams had capsized at least once.

Tengbom / Engstrand broke their rudder so bad they decided to abandon race. Fortunately they where very close to Tengboms home where they left their damaged F18 and traded it for his private hydroplane. Before we knew it they set the air plane down in the bay where we had our lunch brake and then followed the fleet from air instead.

The second leg started outside Sandhamn, rounded the light house Svängen out on the open sea towards the beautiful skerries of Björkskär. The wind was up making it hard to aim high enough with the gennaker up. Some teams capsized, others places it safe getting their gennaker down before reaching Björskär.

As we rounded the check point and turned west the wind had really picked up. It was now a very fast upwind on port tack, through the narrow straights of Finnhamn before tacking our way to the base camp Nässlingen.

Demesmaeker / Gagliano where on fire eager to get back in the game when their jib hook broke. They lost many boats without their jib and finished on 17th place overall after a terrible start of the raid.

The Dutch team father and son Noordzij where incredibly strong and consistent finishing 1st and 2nd giving them the overall lead after the first day.

The sailors dropped in at the beautiful island Nässlingen one after the other and pulled up their boats on the beach and lawn. The large sauna was hot, the beer cold and the food was delicious after a pretty rough first day. At the end of the dinner the Race Officer Ian presented the check points of day 2 and all teams got busy preparing for day 2.

Nice warm 12-15 knots winds from south east and not a cloud in the sky. A beautiful sight as all boats hoisted their gennakers and bore away for a 1,5h downwind reach towards the check point Ängskär. The navigation was not hard, but closing in at Änskär there where many options and boats chose different ways to approach the narrow strait between the islands.

The final stretch was a 5 Nm half wind in high speed towards the paradise Rödlöga where the villagers opened up the cafe and handed out icecream. It is the only habited island in the area and provided a good shelter for the southerly breeze. Some teams had hit rocks and had some repairing to do before the 2nd start of the day.

As always when starting downwind the winner is not always the one who crossing the line first. Teams coming from behind can steal the wind and pass a number of boats in high speed.

The first check point was 10 Nm away downwind with some gybes here and there and dangerous rocks to avoid on the way. After a few more narrow straights the fleet rounded the iconic island and Light house Söderarm and then turned west for a long port tack to the finish at Fejan where Demesmaeker / Gagliani taking the win. A well deserved sauna and the best food that the archipelago has to offer in the restaurant by renowned chef Pelle Lydmar before going to bed in the old quarantine station built in the late 19th century.

On day three the wind shifted to North and since we where heading south it meant another gennaker start followed by alot of downwind sailing and reaches. At this start the dutch team Noordzij where still in the lead, with Karlsson Nordblom just behind and Linder Brunnberg on a third place and Nieminen / Backes and Dahl / Bredberg also in the game.

The lunch break was in a beach at Husarö after a long reach. Demesmaker Gagliani taking the win followed by Karlsson Nordblom. At this point the Finish French team Nieminen Backes, who had not sailed together for some time, got their speed up finishing third, which would also become their result overall in the end.

The 6th leg started with a long gennaker reach with the wind from the side where some teams, but not all, managed to sail with their gennaker up all the way to the first Checkpoint Morsken. Then followed a long downwind to and through the island of Nassa and then towards the Finish in Sandhamn. At the end of the leg the wind died and boats where drifting on the sea a few miles outside of Sandhamn. There where two alternative ways to get to the finish and the frustration onboard the boats taken the “wrong” way was huge as the boats that took the “other way” got the wind first and went from 1 knot of speed to trapezing in 10 knots. The positions among the top three teams was identical to the previous leg.

Sauna, drinks in the sunset and dinner in the charming boat house at the youth sailing camp site of KSSS at Lökholmen.

Day 4: Sandhamn to the finish at Saltsjöbaden

On the final day of racing sun was shining and there was a light breeze, possibly even lighter around noon. The start outside Sandhamn was yet another downwind start towards the lighthouse Svängen. Dahl/Bredberg did not get the best start. First they where OCS in the start and had to turn back to the starting line and when they got to Svängen they did not have enough room and scratched the starboard hull against the lighthouse that refused to give more room.

Another long reach in trapeze with wind from the the side followed, where teams that managed to keep the gennaker up all way could gain many positions. At the Checkpoint Kalken the course was Westbound through all the islands of the middle archipelago. It became a long upwind with some tacks for the first time in 4 days. First to the finish at the beach at Björnö was the outstanding Belgians Demesmaeker Gagliano followed by Linder Brunnberg (SWE) and the best mixed team Hedann Jensen / Wyon /DEN) on third. For Karlsson Nordblom this leg was a disappointment with a 10th place. Still they would only have to finish within 12 positions after the Belgians in the last race to be able to claim the overall victory.

Leg 8 was a short sprint to the finish in Saltsjöbaden. The wind was light as all teams set their gennakers for the 8th gennaker start of 8 possible. After about half an hour most teams had taken down their gennakers and where an a long upwind mostly on starboard tack. The cutoff point was reached a minute before the course would be shortened so the course was to sail pass Saltsjöbaden, round a mark on the north side of the bay Baggensfjärden before heading back to the finish.

The pressure on Karlsson Nordblom seem to have taken its toll, because they completely lost it in the super light winds and ended on a 16th place loosing the overall victory to Demesmaeker / Gagliano who again finished the last race with a bullet. A remarkable series of 5 bullets and one 2nd after the catastrophic first day. Truly a very worthy winner overall after having sailed the raid in the archipelago for so may times before, always ending among the top three teams.

The Race Organisation, the safety crew, the judge and all volonteers did a top job giving the sailors an amazing experience that will forever be in our memories. And to me it will be remembered as the downwind raid; the year we started with gennakers hoisted in all 8 races.

Thank you all who made it possible 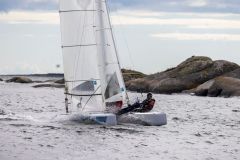 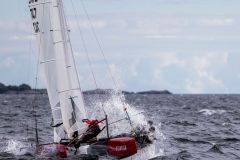 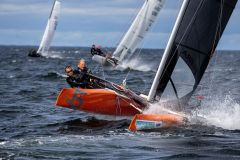 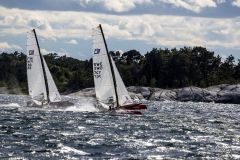 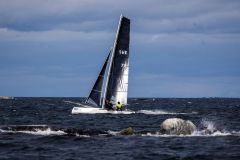